In the summer of 1941 Enid Blyton alighted from a steam locomotive at Corfe Castle station in the Isle of Purbeck. She took a short walk through the village, turned right at the war memorial and then she saw Corfe Castle for the very first time. As she wandered its jagged ruins she would have been as giddy as her hyperventilating heroes, the Famous Five, for she had discovered the setting for their very first adventure.

Blyton would take up residence in the jaunty little seaside town of Swanage, staying at The Ship, the Grosvenor Hotel and latterly the Grand Hotel; and she would take a customary swim around both piers before dinner, with her second husband, Kenneth Darrell Waters, in tow. Today, there is only one pier and the Grosvenor is gone but Swanage retains its old-fashioned charm. 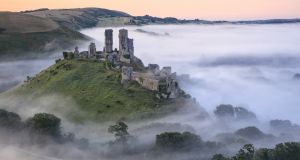